We took a few pictures during our recent trip to Asia. OK, we actually took a few hundred pictures, and we’re just now beginning the process of separating the so-so shots from the, shall we say, not so-so shots. Below is a small sample size of scenes from several of the temples we visited in the Angkor region, with more to follow in the coming days. 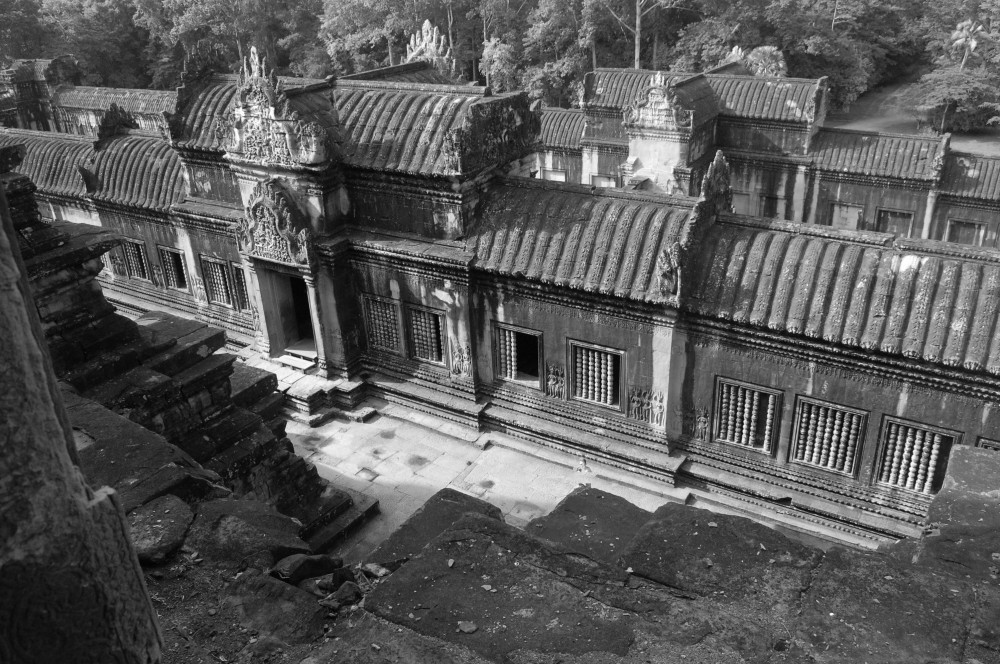 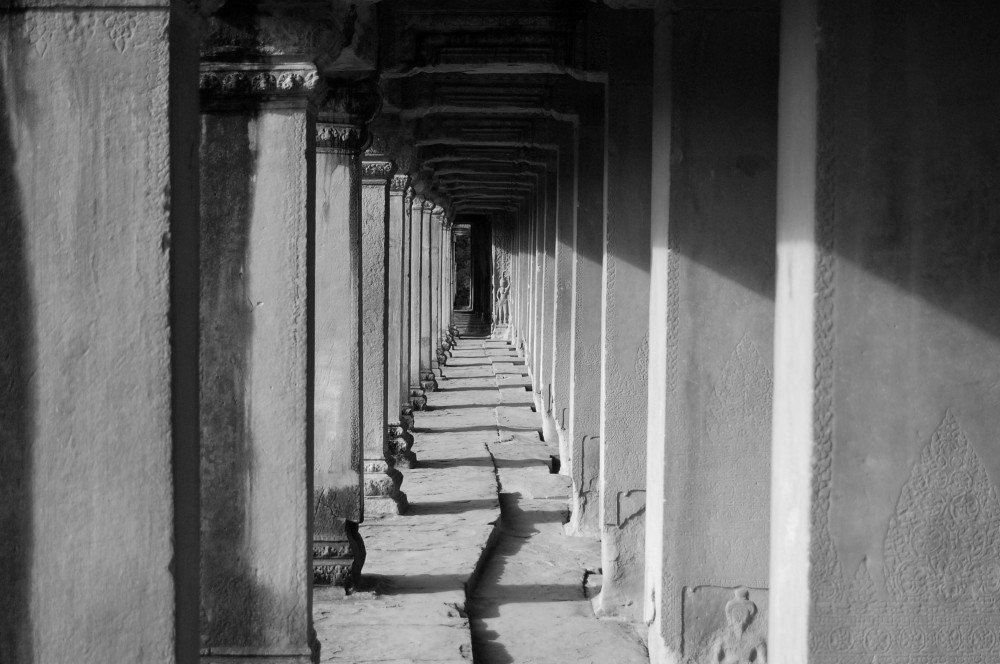 Churning of the Sea of Milk, Angkor Wat 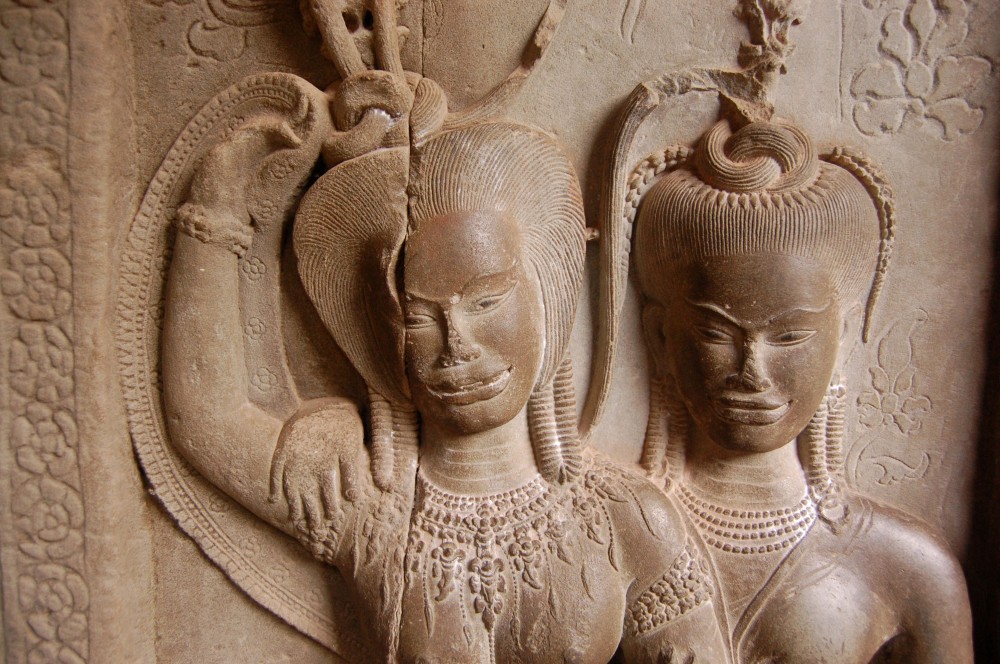 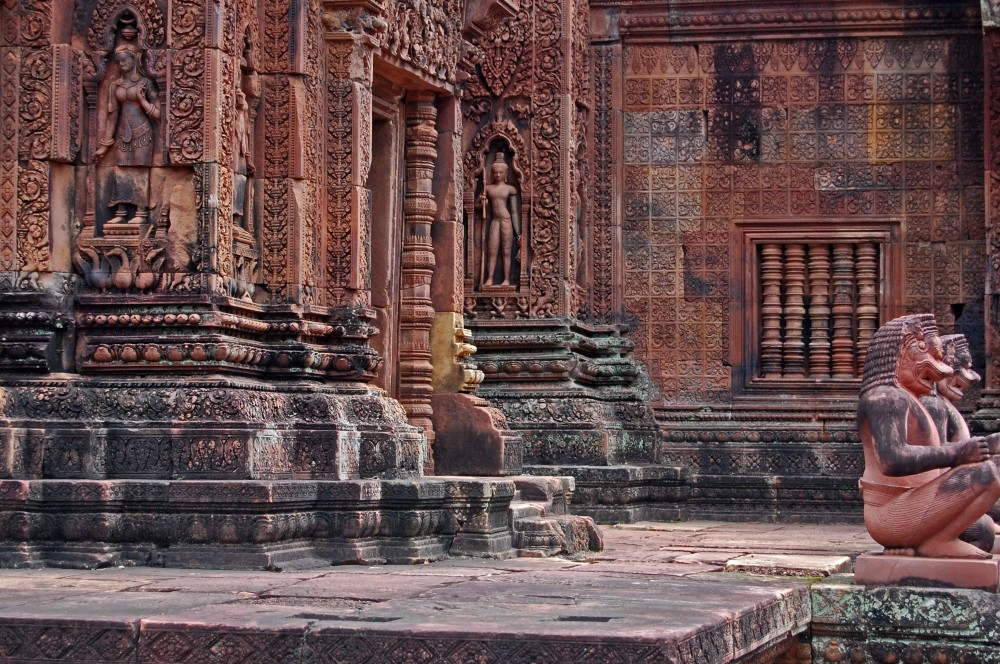 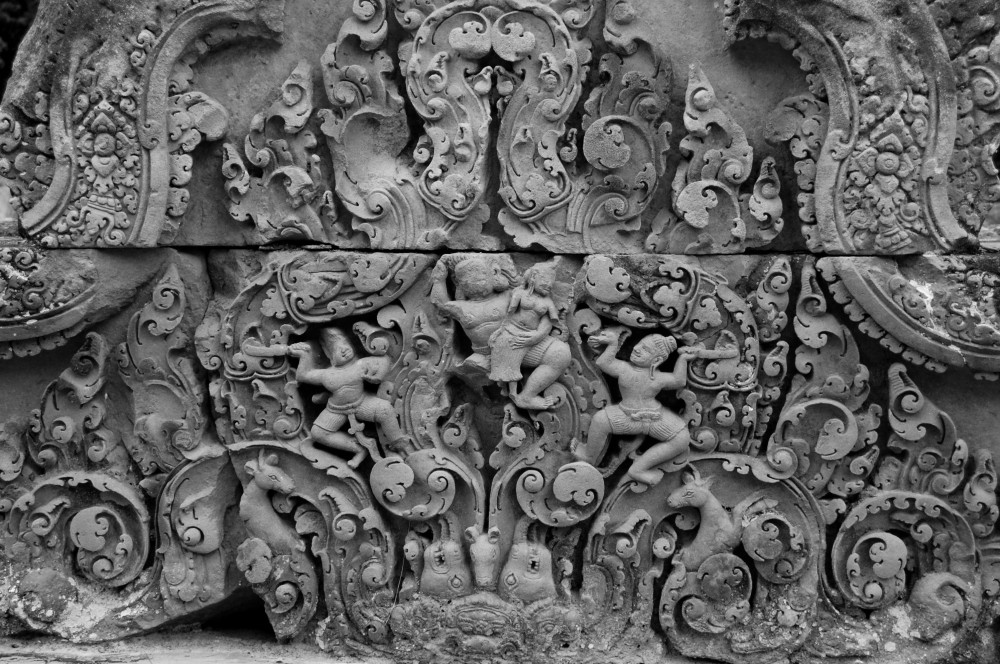 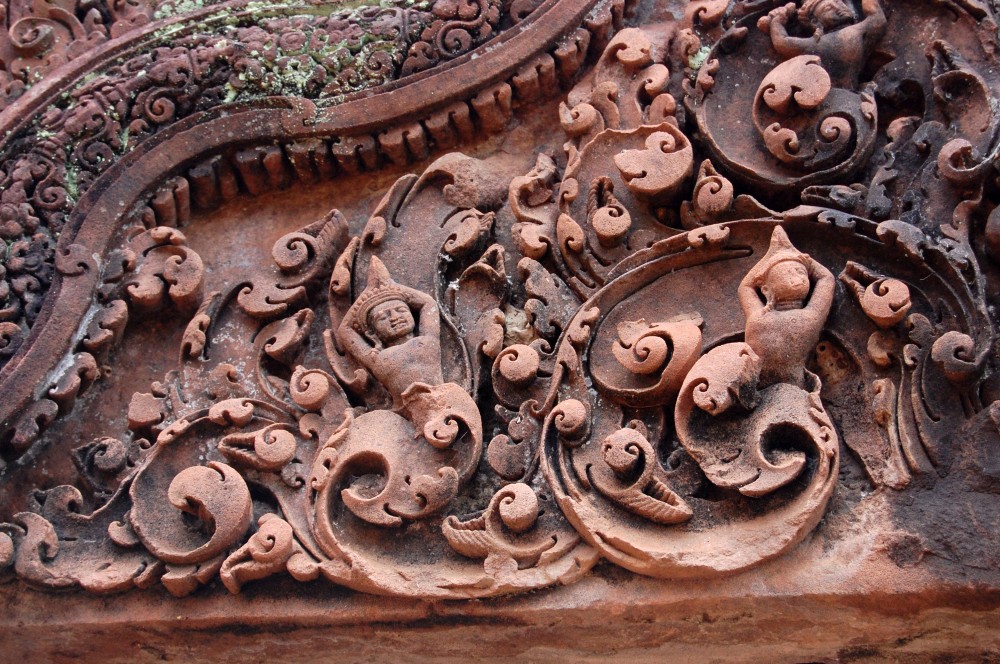 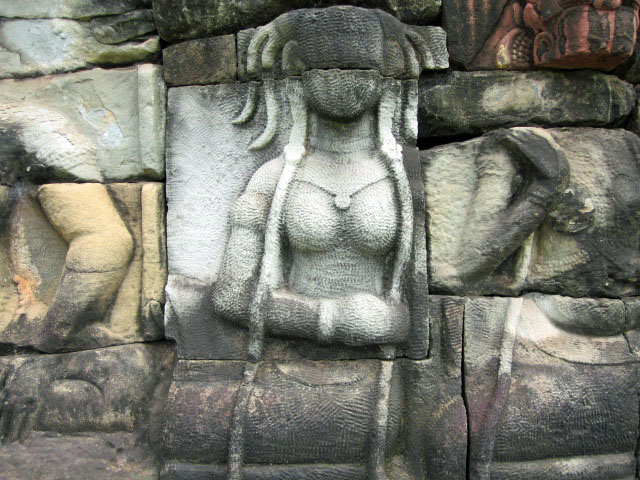 Terrace of the Leper King 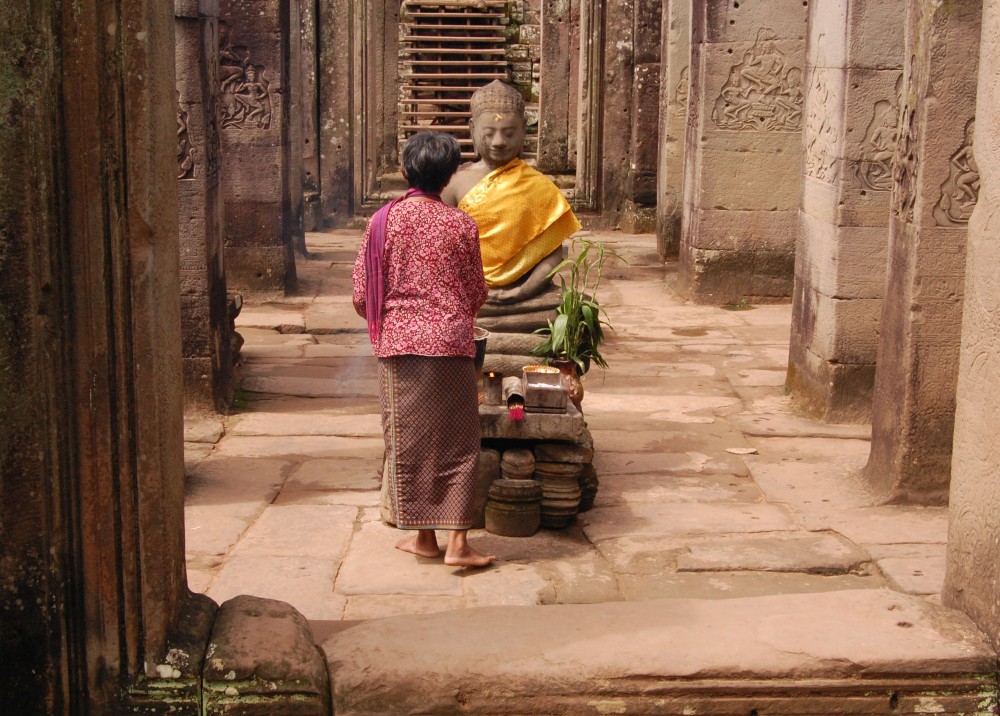 A Quiet Moment at the Bayon, Cambodia

Spend any amount of time in Southeast Asia, and eventually you’ll have to cross the street. Sounds easy enough, but wait until you see your first impenetrable, tangled mass of traffic traveling full speed ahead, coughing up exhaust and dust and soot and all the other nasty concoctions the road throws at you. You’re in for a wild ride. I’m no pro, admittedly, but I have crossed quite a few streets in Asia lately. Here’s several tips I’ve picked up along the way.

Motorbikes good, cars bad: Ah, the motorbike with its constant purr advancing on you from all angles. These champion two-wheeled Asian workhorses are highly maneuverable, even when fully loaded with 5 passengers and a 50-pound bag of rice. You shouldn’t worry too much about motorbikes. Cars and trucks…well, those are a different story. Fortunately they are far outnumbered by motorbikes, giving you a fighting chance of successfully crossing the road. But it’s probably safe to say that no car in the history of Southeast Asia has ever politely stopped or slowed down for a pedestrian. The driver may even speed up to avoid having to wait for you to get by. It’s best not to get pancaked, so wait for a small gap in car/truck traffic before crossing.

Cross slowly: Your first instinct upon encountering a busy Southeast Asian intersection may be to wait for a sizable gap in traffic (which won’t happen), sprint and weave (which will probably get you killed), or stand paralyzed on the corner while a nice doughnut lady incessantly demands that you purchase her goods (which you should probably consider).  No, do not trust your instincts here. Cross as if the street is littered with dog turds, placing one cautious but confident foot in front of the other as you needle your way to safety. Do not succumb to the frightened urge to alter your speed or adjust your course. Slight hiccups in your step will throw a motorbike driver off, potentially causing a chain reaction. Pick a line. Stick to it. Buy another doughnut on the other side.

Respect the traffic hierarchy: You, the lowly pedestrian, have little to no traffic clout on the street or even the sidewalk, for that matter. The bigger the vehicle, the more respect it earns. It goes like this: a bus trumps a truck, which trumps a car, which trumps a motorbike. The pedestrian simply gets squashed by all of the above. The bus can basically swerve all over the road at will, just as long as the driver blasts his horn every half second. Trucks, cars, and motorbikes can do the same, just as long as they stick to the hierarchy. Make sense? Listen carefully for those horns. I was spacing out dreaming of bun cha when I got mirrored pretty hard by a car trying to pass me on a narrow street. Hey, he gave me fair warning. My bad.

Keep you head on a swivel: Look left. Look right. Look straight ahead. Look behind you. Look a few degrees more to the left. More to the right. You get the idea. I wouldn’t be surprised if a motorbike peeled out of an elevator. Be ready for anything.

Traffic lights are merely suggestions: In fact, all traffic signs and laws are merely suggestions. If a red light doesn’t suit a motorbike driver’s schedule in Southeast Asia, he or she pays it no attention and proceeds through the intersection with very little caution. I was sitting shotgun in a taxi in Hanoi just the other day as an old woman blew a light that had turned red 5 seconds earlier resulting in a t-bone collision with another motorbike.

Really, crossing the street is not all that bad once you get the hang of doing it a few times. Good luck out there.

A juvenile gator watches us closely at Jean Lafitte National Historical Park and Preserve in Louisiana.

Fishing off a dock for piranha in the Amazon

While I doubt the city will ever use “Gateway to Awesome” as its official slogan, Flagstaff, Arizona really is a gateway to so many awesome adventures.

For starters, Flagstaff has Sedona and its vortexes to the south, the Grand Canyon to the northwest, the immense Navajo reservation to the east, millions of acres of national forest surrounding town, Arizona’s highest peak in its backyard, and a rockin’ year-round outdoorsy vibe.

Oh, and it snows in Flagstaff. Sometimes by the foot. In Arizona. Weird, right? Out-of-towners never believe it, choosing instead to say things like “Snow!? Yeah right, buddy! Not with all that ridiculous Arizona heat!” Believe it, though!

Sound like your kind of town? Right on! Here are 7 ideas to keep you busy during your stay in Flag:

END_OF_DOCUMENT_TOKEN_TO_BE_REPLACED 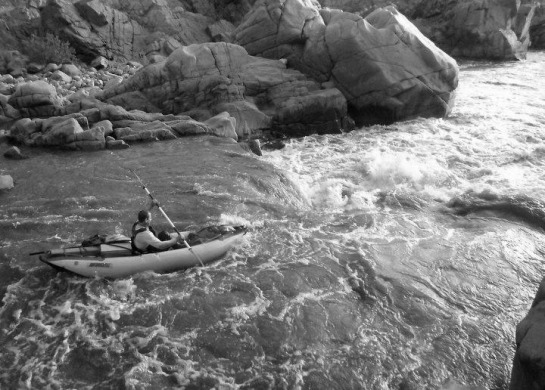 Rule No. 1 of a whitewater trip: rig to flip.

We sacrificed a little whiskey to the Salt River at the put-in as a show of respect. Not quite satisfied, she devoured our entire kitchen set a day later—pans, stove, fuel, cutting board, spatula, utensils, dishes, and even a fire pan my buddy was bragging about just a few hours earlier.

The last piece of equipment I remember seeing as I was floating feet first down Mescal Falls Rapid—and there were quite a few miscellaneous items in the frothy mix—was our poor, poor kitchen set, formerly rigged to my boat, now slowly sinking to the bottom of the Salt River like a dying ship lost at sea.

“Feed me!” The Salt River will gladly accept anything you have to offer.

I reasonably expected a disappointed response to my minor mishap. But my buddies actually seemed rather excited by the idea of a primitive wilderness experience.

Forced to be creative, we cooked chicken and vegetables on tamarisk skewers one night. Then we started cooking brats and peppers over a makeshift stone grill the next night, only to get impatiently hungry and skewer every last brat in sight. We used a flat rock as a cutting board, and fashioned a spatula/serving spoon out of a piece of driftwood.

All in all, we made things work. And we had a damn good time while we were at it.

The best part? No dishes. Something to think about next time you’re cooking dinner for the family.

This is one of my many pathetic attempts at looking “tough” for the camera. As you can see, failure abounds.

To achieve a “tough” look in a photo, the subject must:

This lil’ beast in the photo handled remarkably well over a few of Costa Rica’s “roughest roads” (a debatable observation, Lonely Planet). She might be small. She might be a manual, bare bones piece of machinery. But she packed a punch around muddy corners and up slippery inclines.

Kids like me from the country have a significant advantage when it comes to driving treacherous backcountry routes. You city slickers pay way too much attention to the threat of oncoming traffic, clinging to your side when you should utilize the entire playing field. You forget that there are no rules of the backcountry road, besides the obvious “don’t hit the other guy.”

Me? Well, I felt like I was back home driving Dukes of Hazzard style. If I had a dime for every eye roll my wife produce while I was driving this thing, I would be a very rich man.

Anybody else love driving in the country, especially in foreign lands?